BCM-7, Harmful Effects of BCM-7, and Side Effects 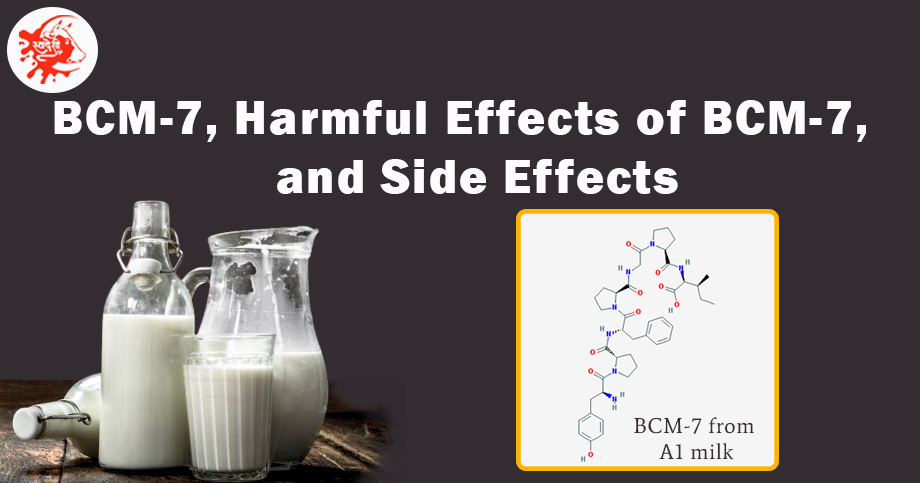 Beta-casomorphin-7 is a group of narcotic or opioid peptides which are released during the food processing process or digestible gastrointestinal process from the Beta-casein during the consumption of A1 milk type. Milk is scientifically divided into two different types, A1 milk type and A2 milk type. This division depends upon the absence and presence of histidine and proline at the 67th position of amino acid. A1 milk type is proposed to be the wellspring of BCM-7 as it has histidine on the 67th position, which stimulates the production of Beta-casomorphin-7, whereas the A2 milk type contains proline that completely resists hydrolysis. On the other hand, various studies have proven Beta-casomorphin-7 to be harmful to the development of Type-1 diabetes, cardiovascular diseases, and neurological disorders. So, the question here lies, is BCM-7 harmful? Let’s check it out.

The word casomorphin[1] is a combination of two words, caso and morphine. The word caso means casein, and the word morphine is derived from the Greek word morphs which means sleep. These peptides are derived from the β-casein of milk, which later produces pharmacological and opioid activities. These peptides tie together μ-receptors (present in the central nervous system), immune cells, and the gastrointestinal tract. Is BCM-7 harmful to our bodies? Yes, it is known as BCM opioid receptor that creates an impact on the gastrointestinal tract, and it can be harmful to other body organs, like the cardiovascular, neurological, and endocrine frameworks.

To know if BCM-7 is harmful that’s read through the side effects of consuming milk type that produces BCM-7 during the digestive process.

Beta-casomorphin-7 (BCM-7) is a narcotic peptide delivered during the absorption of A1 beta-casein. It’s the justification for why certain individuals believe regular milk to be less healthy than the A2 milk type. A couple of researchers have recommended that Beta-casomorphin-7 might be connected to autism, type 1 diabetes, coronary illness, digestive problems, and sudden infant deaths. So Is BCM-7 harmful for everyday consumption? Yes, it is.

While Beta-casomorphin-7 might influence our digestive framework, it’s as yet unclear how much potent opioid peptide is absorbed into your blood. Researchers have not found BCM-7 in the bloodstream of healthy grown-ups who consumed cow’s milk, yet a couple of tests demonstrate that μ-opioid receptor agonist might be available in newborn children. While Beta-casomorphin-7 has been widely explored, its general health benefits are still unknown. So let’s read about what makes BCM-7 harmful.

The debate about the potential health impacts of BCM-7 is yet ongoing. Research recommends that A1 beta-casein, which prompts the production of potent opioid peptides, causes adverse stomach-related side effects in specific people. Be that as it may, the validation is still excessively unclear for any strong ends to be made about the alleged connections between BCM-7 and different circumstances, like type 1 diabetes and autism. At SwadeshiVIP, we deliver 100% organic and BCM-7-free, A2 milk that is tasty & nutritious.

Read Our Article: 5 Proven Health Benefits of the A2 Cow Milk for Senior Citizens