Happy Navaratri 2022: A Festival of Utmost Importance for Hindus 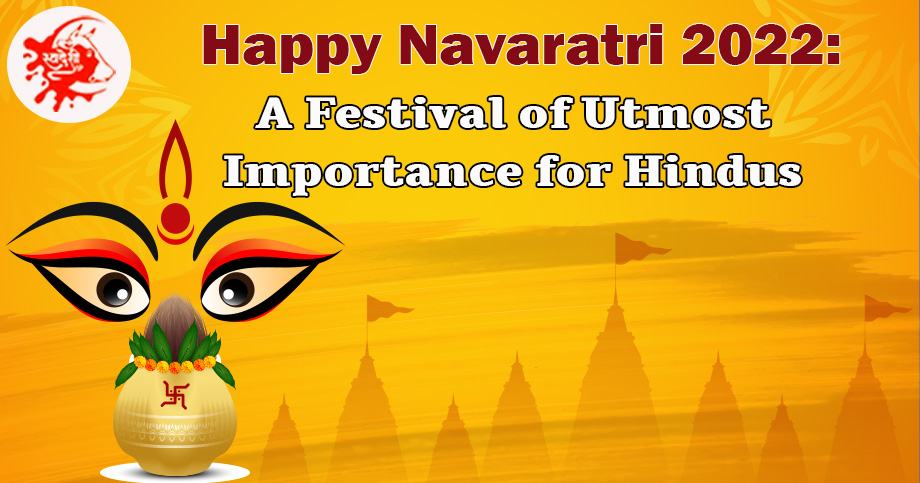 This year this auspicious festival will begin on 26 September and end on 05 October. The whole nine days are dedicated to worshipping the nine avatars of the Goddess of Power, Durga. Every day, you wear a distinctive colour to honour the Goddesses: Power (Yellow), growth (green), destruction (Grey), Pleasure (Orange), Calmness (White), Vigour (Red), health and prosperity (Royal Blue).

Why We Celebrate the Navaratri?

The folklore of Navaratri[1] tells of an epic battle between the powerful demon Mahishasura and Goddess Durga. Lord Brahma had given the Mahishasura an everlasting life in the situation because it is a universal law that everyone who is born must die and that he could only be defeated by a woman. He attacked the (Trilok) three worlds, Earth, heaven, and hell, armed with self-confidence and immortality. No one ever, not even the Gods, could kill him.

After failing so many trials of defeating Mahishasura, Lord Vishnu, Lord Shiva, and Lord Brahma all decided to unite their powers in the women formed by Lord Vishnu to kill Mahishasura. The Goddess was devised and given the name ‘Durga.’ She fought with the demon for 15 days. According to folklore, Mahishasura started changing his forms in order to mislead the Goddess. He eventually assumed the form of a buffalo, and Devi Durga killed him with her ‘Trishul’ (a forked weapon), declaring victory over evil.

Supremacy of the Festival

Let’s explore the significance of Navaratri in the year 2022. During the nine days of Navratri, nine different forms of Goddess Durga are worshipped.

On this auspicious day, Devi Shailputri is worshipped, also known as the Mountain’s daughter of Maa Parvati.

Parvati graced her forehead with Ardha Chandra after getting married to Lord Shiva. As a consequence, she is revered on the third day.

On the fourth day of Navaratri, Maa Kushmanda is worshipped as the creative vision of the world.

Skandamata, Skanda’s (Kartikeya’s) mother, is honoured on the fifth day.

Katyayani is a warrior goddess, and Hindus honour her on Shasti, i.e., the sixth day of the Hindu calendar.

We honour Maa Kaalratri, one among Maa Durga’s greatest fierce forms, on the seventh day.

Ashtami is considered as one of the most auspicious days of Navaratri. Devi Mahagauri, who symbolizes serenity and wisdom, is worshipped on the eight days.

The Goddess Siddhidhatri part of Goddess Durga is worshipped on the Navmi.

Why Do People Fast During Navaratri?

Across most parts of India, the Navaratri Vrat or Navaratri Fast is discovered for all nine days. Navaratri is a cultural celebration of the feminine as the conqueror of evil. It represents a time when every aspect of the planet slows down, including the body, which states a lack of energy as the weather changes with the arrival of winter. Fasting during the whole Navaratri helps to build immunity in the body by flushing out any toxins that have been accumulated. Divine fasting or substituting heavy grains with sattvic meals such as fresh fruits and vegetables requires a lot of energy and balance to the system. Every evening in Southern India, a typical lentil dish is prepared because veggies are a rich source of protein that can strengthen the immune system.

Since each Avatar symbolizes a distinct aspect of Goddess Durga, various Bhog is offered to various forms of Navdurga to obtain her blessings. The following is a list of Prasad to offer to Navdurga:

Goddess Shailputri is honoured during the first day of pious festival. Goddess Parvati was born as Lord Himalaya’s daughter after Goddess Sati self-immolated. To obtain the blessings of Maa Shailputri, who personifies the strength of Brahma, Vishnu, and Mahesh give her the Prasad of Desi Ghee.

Goddess Brahmacharini is honoured on the second day of Navaratri. She represents perseverance and sacrifice. Offer sugar as a Prasad to the Goddess to fully embrace her positive characteristics.

On the fifth day of Navaratri, Goddess Skandamata is worshipped. Mata Parvati was given the title Goddess Skandamata after becoming the mother of Lord Skanda (also known as Lord Kartikeya). Throughout the grand festival, offer Banana as a Prasad to Devi Skandamata, who bestows wealth and power on her devotees.

On the eighth day of Navaratri, Goddess Mahagauri is worshipped. As per Hindu mythology, the Goddess Shailputri was incredibly pretty and graced with a light complexion when she was sixteen years old. She was recognized as Goddess Mahagauri because of her extremely fair complexion.

Give Prasad of Coconut to Devi Mahagauri to purge sins and gain her blessing in the form of worldly successes.

On the ninth day of Navaratri, Goddess Siddhidatari is honoured. Lord Rudra worshipped Adi-Parashakti for formation at the time when the Universe began. Goddess Adi-Parashakti is said to have had no form.

Adi-Parashakti, the supreme Goddess of Strength, presented herself in the form of Siddhidatari from Lord Shiva’s left half. Throughout Navaratri, give Sesame Seed Prasad to Devi Siddhidatari to accomplish all kinds of Siddhis.

Celebrations of Navaratri across India

As diverse as the native traditions in India are, so are the Navaratri celebrations, which take on various flavours in various regions of the country. The soul of Navaratri and the wisdom of these ancient traditions, on the other hand, is a connecting thread that ties all of the disparate celebrations together. In the east and northeast region, the goddess is known as Durga, who defeated the evil demon Mahishasura. These last four days of the holy festivals are marked by fasts throughout the day and celebrations at night, with the eighth day being Durgashtami, a day solely devoted to the worship of the goddess Durga. On the 9th day, Mahanavami is thought to be the day when the divine finally defeated evil. The celebrations conclude on Vijaydashami, the day after Navaratri, to commemorate the goddess victory.

The 10th day is known as Dussehra in the northern regions of the country, honouring Rama’s victory over Ravana. Ramleela, an enactment of the Ramayana story, is presented at various festival sites during the nine days preceding Dussehra. “Kullu Dussehra” memorializes Rama’s returns to Ayodhya in Himachal’s Kullu region. On this specific day, idols are taken from temples and paraded through the streets of Himachal. During the first seven days of Navaratri, devotees in Punjab fast and do the jaagrans. During the last two days, the fast is broken, and nine little girls and a little boy (termed “Kanjika”) are worshipped as the divine’s appearance. This tradition, which is truly representative of cultural blending, is also practised in Maharashtra, specifically in the Mumbai area.

Devotees seek the blessings of all three phases of divine femininity in order to attain overall happiness in life, hence the nine nights of devotion. This auspicious time period of Spiritual Sadhana of the magnificent and innovative energy is Navdurga Parva. As we all know, Desi Cow has its holy significance in the Hindu religion. Offering the Prasad made up of Fresh A2 Cow Milk or Pure Desi Ghee will surely help you manifest the blessing of Maa Durga. These nine days represent the enlightenment of Divinity — the Mother Divine’s strength which does not negate anything while nurturing the positive aspects. By bringing up and awakening this Holiness within us, we can learn to encourage positivity in ourselves while effectively removing the negativity. Here at SwadeshiVIP, we wish you a very happy Navaratri.

Read Our Article: Why Is Desi Ghee Preferred Over Oil For Lighting The Lamps For Pooja?